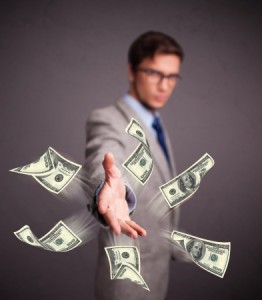 It’s a rather common scenario. A Buyer’s Agent and a Seller’s Agent are negotiating a deal for their clients. At some point, the Seller is not willing to come down another cent, and the Buyer is willing to walk away before adding another penny to their offer.

Meanwhile, the agents are doing their own math on the deal. Its something to the effect of: “I’m making $12,000 in commission on the $400k deal…We are only $5,000 apart. Would it be better for me to just chip in $2500 of my commission to get this deal done now, rather than start back at square one with these clients? For the Buyer’s Agent, the answer is almost certainly YES, since starting the house hunt over again is going to take them a lot more time, and will post-pone their payday. For the Listing Agent, it may not be quite as attractive unless this is the only offer they have gotten and they are not confident they will get another.

And so the conversation between Agents goes…”Hey, I’m willing to throw in $2500 if you are, to get this thing done.” Sometimes, the Clients even appreciate it. Sometimes they still refuse because they are so bent out of shape at the other side.

Here’s the point though: Would Agents be willing to contribute to their clients purchase or sale of property, out of their own pocket, if they truly felt that they had earned every penny of that commission? I don’t think so. After all, $9,500 is still a pretty good payday for them, and if they broke down that number to come up with their hourly rate, they are still making more than most high priced Attorneys on an hourly basis.

This is another symptom of how this real estate system is broken. When commissions or compensation are tied to the value of the house, versus the value of the service itself, an imbalance develops that leads to mistrust between Clients and Agents. Buyers and Sellers don’t find it all that generous when Agents offer part of their commission usually because they know that the Agent is being paid more than they are worth.

Since the start of Terrace 24 Realty, we have believed that the value of the service should dictate our fees, not the value of someone’s home. Homeowners should not be penalized or be made to pay more for the same service, just because their home is more valuable than their neighbor’s. An interesting side effect of that is that we have never been asked to drop our fee to make a deal work by a Client…and we’ve never felt that we should either!